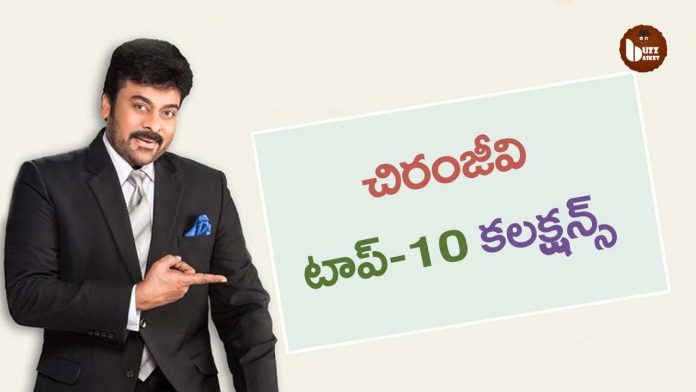 Megastar Chiranjeevi entered Telugu film industry in 1978 with Punadhirallu. He started from scratch and made it so big because of his acting. His terrific dance moves are still inspiration to many. Due to Political entry in 2007, he took a break from Industry and made sensational re-entry with Khaidhi No.150 which is his landmark film. Check out his Top 10 highest collected films.

KHAIDHI NO.150
Theatrical business – 89 Cr
Box-office – 94.97 Cr Share
Comeback film after 149 films. This film is a remake of Tamil blockbuster Vijay starrer Katthi. Jaw dropping collections proved the stamina and craze of Chiranjeevi even after a decade break.

INDRA
Budget – 13 Cr
Box-office – 27 Cr
Mass commercial entertainer in which Chiranjeevi acted in a full-length faction role for the first time and was praised pretty well by critics and audience.

SHANKAR DADA MBBS
Budget – 14 Cr
Box-office – 26 Cr
Out and out commercial fun entertainer which is a remake of Sanjay Dutt’s Munna Bhai MBBS. He giggled audience in the role of a fake doctor. His slang and comic timing are terrific in this film.

STALIN
Budget – 20 Cr
Box-office – 23.50 Cr
Story of a guy who feels socially responsible for the odds in society. Revolves around a person who believes if one helps others and so on there will be no problems in the society.

TAGORE
Budget – 12 Cr
Box-office – 24 Cr
Story of a professor who takes up the mission of eradicating corruption in unlawful society by unlawful ways. V.V.Vinayak brilliantly made use of his hero in this socially provocating film which got huge appreciation.

JAI CHIRANJEEVA
Budget – 18 Cr
Box-office – 15 Cr
Family entertainer based on the story of a mama and his niece. Even though film runs with hilarious pace of fun, this didn’t help in bringing money.

ANDARIVADU
Budget – 15 Cr
Box-office – 13 Cr
This film showcases unbreakable bonding between father and son. Chiranjeevi is the scene stealer in dual role but over the top comedy and routine story left his fans in disappointment.